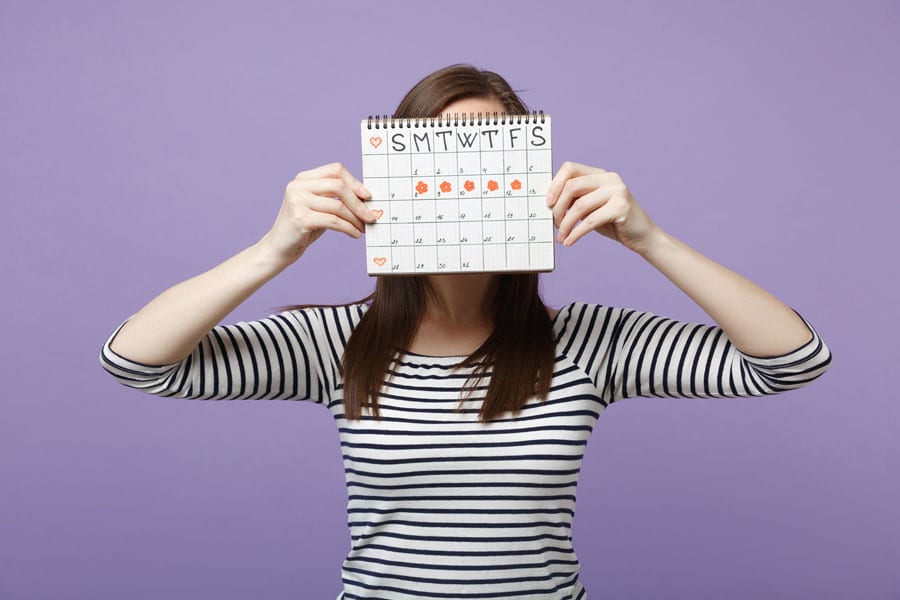 Your menstrual cycle provides tons of information about your overall health. Irregular periods are not something you should ignore.

A standard menstrual cycle can range from 21 to 35 days. Meanwhile, the period itself lasts four to seven days. Every woman’s biological process is different. However, most women know what to expect and when.

If things do not proceed as expected, it’s a cause for concern. Abnormal Uterine Bleeding includes everything from unusually light or heavy menstrual cycles and unorthodox timeframes to missing periods and unexpected pain.

Due to your menstrual cycle’s impact, there are many potential explanations for irregularities. Some are benign and easily remedied. However, others are far more pressing. Here are four of the most common causes for irregular periods.

Perimenopause is a transitional period that can start several years before the last period. During this time, the body goes through many significant changes. While the effects aren’t as noticeable as menopause itself, perimenopause can influence the menstrual cycle. It turns once-regular periods into unpredictable occurrences.

Before entering perimenopause, hormonal fluctuations are relatively stable. Estrogen and progesterone levels rise and fall consistently with a woman’s cycle.

On top of all that, perimenopause can cause additional symptoms. Some of the most common include hot flashes, mood changes, vaginal dryness, and sleeping difficulties.

RELATED: Are you experiencing perimenopause symptoms?

PCOS is a hormonal disorder that can affect women of reproductive age. The exact cause of PCOS is unknown. However, research shows that genetics, insulin resistance, and inflammation come into play.

Women with PCOS produce higher levels of androgen, the “male hormone.” The excess androgen disrupts the menstrual cycle, resulting in irregular periods. It causes infrequency while also making it difficult for women to get pregnant.

The condition causes a slew of symptoms. In addition to missed periods, it often causes heavy menstrual cycles due to the buildup of the uterine lining. Some women can also suffer from excessive hair growth, male pattern baldness, and acne.

Uterine fibroids are more common than most think. Approximately 70 percent of women in Los Angeles and beyond have fibroids.

Generally, fibroids are non-cancerous growths. There’s less than one percent chance of malignancy. Nonetheless, these tumors can cause several issues. The severity of a fibroid depends on its location and size. They can be less than an inch in diameter. However, some are capable of growing closer to the size of a grapefruit.

In addition to causing irregular periods, fibroids can cause lower back pain, leg pain, and discomfort during sex. Larger fibroids can also complicate pregnancies and impact fetal growth.

Endometriosis is another widespread condition. This one affects approximately one out of every ten women. It can cause debilitating menstrual cramps and gastrointestinal pain. In many cases, it’s also to blame for heavy menstrual cycles and bleeding between periods.

The exact symptoms can vary from one woman to the next. It all depends on its severity and spread.

This health condition revolves around the endometrium, which is the tissue that lines the uterus and sheds with a regular period. When endometriosis occurs, that lining starts to develop outside the uterine cavity. It can grow around the fallopian tubes, on the intestines, and around other organs in the lower digestive tract.

Misplaced endometrium can wreak havoc on the body in many different ways. While there’s no permanent cure for endometriosis, it is manageable with some professional guidance.

RELATED: Endometriosis Diet: What To Eat and What to Avoid

If you’re experiencing irregular periods, seeking professional care is paramount. While not all causes are severe, heavy menstrual cycles, unusual timing, and unexpected pain could be a sign of trouble. The only way to know for sure is to visit a urogynecologist like Dr. Tahery.

Give the offices of Dr. Michael Tahery a call to schedule a consultation today. Dr. Tahery is a urogynecologist with more than 20 years of experience providing women’s health and wellness services to the Los Angeles area.